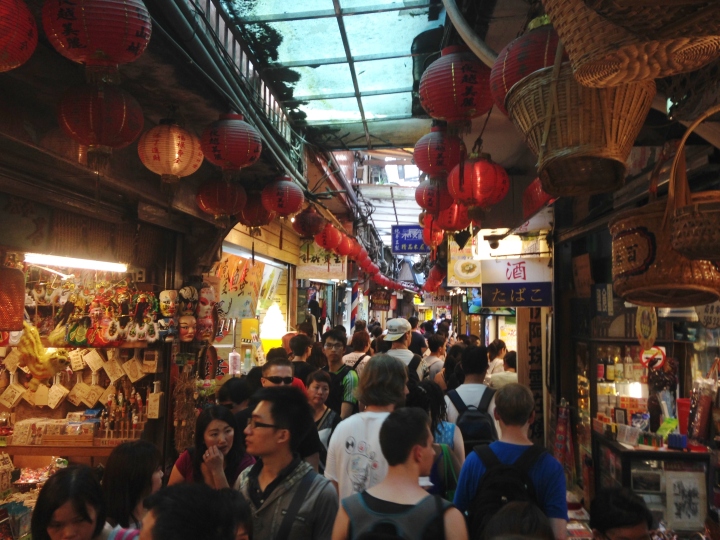 Or rather: “slowed down: a magical traffic jam in jiu fen.” 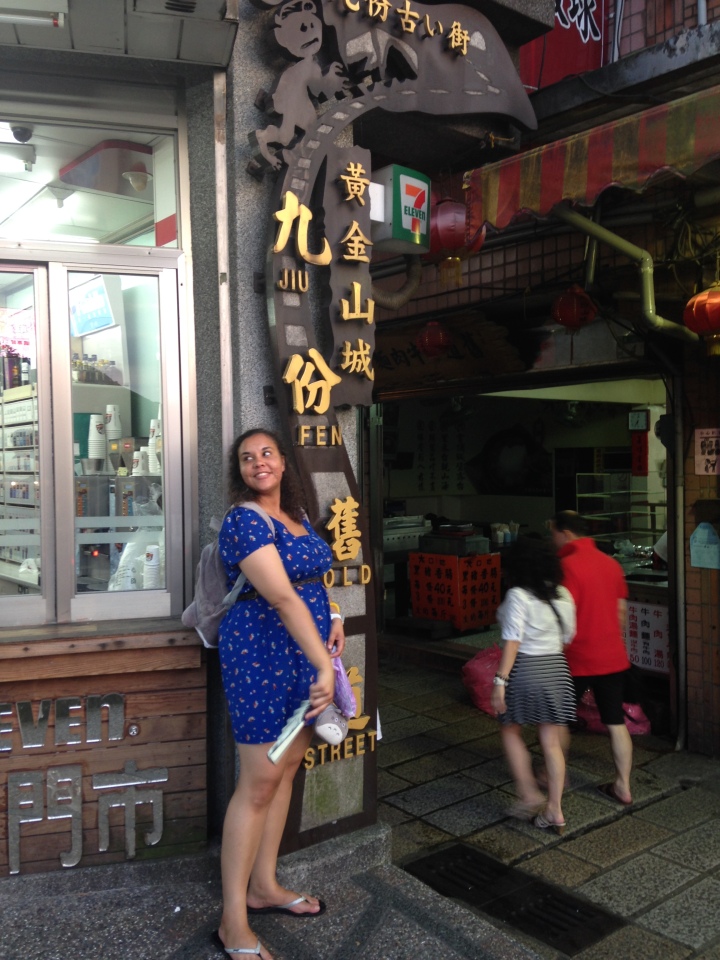 As anyone who has talked to me knows: I have been dying to go to Jiu Fen. If you’ve listened to me drool over this place–you will know, that aside from stepping into the land which inspired some of the scenes from one of my favorite movies (Spirited Away) by one of my favorite directors (Hayao Miyazaki), that I also wanted desperately to try the Taro Yam Balls or yu yuan [ 芋圓] that Jiu Fen is also famous for.

And lucky for me, both of those plans were in the field-trip itinerary! 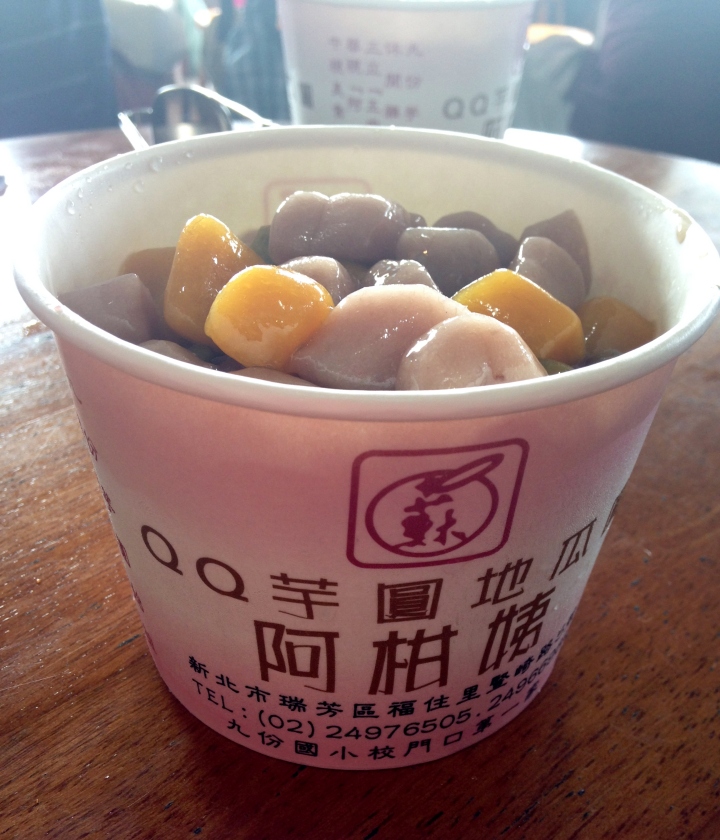 We went to  [ 阿柑姨QQ芋圓 ] or “A Gan Yi QQ Yu Yuan” to sample the yu yuan. The term “QQ” is a Chinese phrase which can mean cutesy–but, in regards to food, describes a texture that is bouncy and chewy.

The yu yuan clearly have a bounce in their step.

Topped with red beans, nestled on ice, the yu yuan might be a bit of an acquired taste (if ever acquired) for those not as intrigued by the more traditional flavors of Chinese desserts. My bowl contained both the taro, yam, and green bean flavors.

I did enjoy my bowl of yu yuan, though I would not call it my most favorite thing that I’ve eaten since I’ve been in Taiwan. But, given the ever present heat and humidity, the taro balls on ice were a refreshing compliment to the oven that is the outside world. 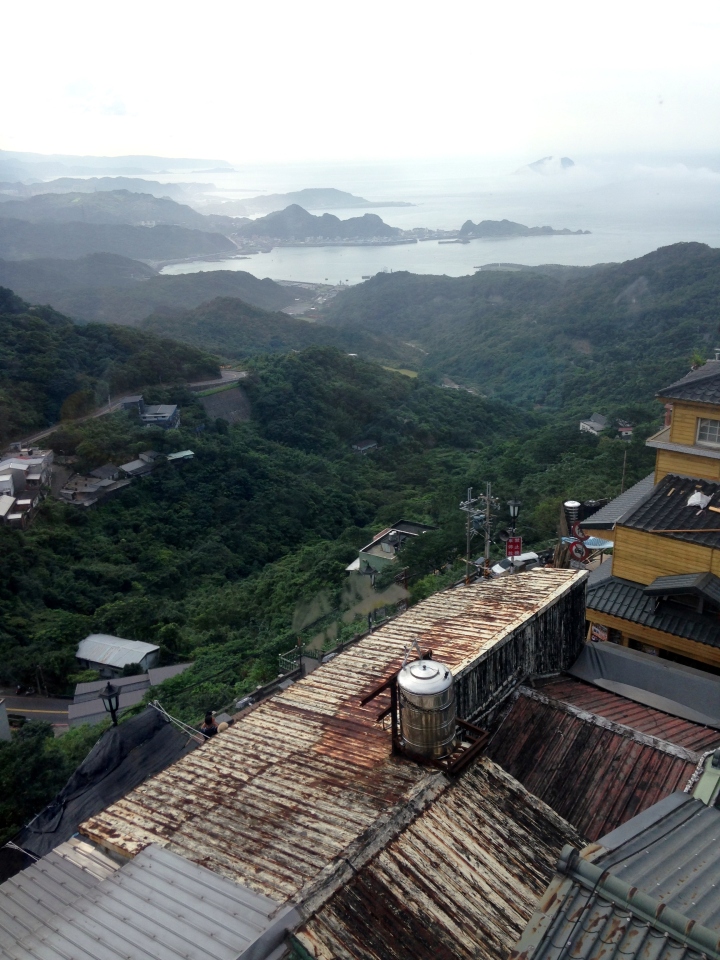 The two photos sandwiched between these words, were taking from looking out the window of our sitting area. 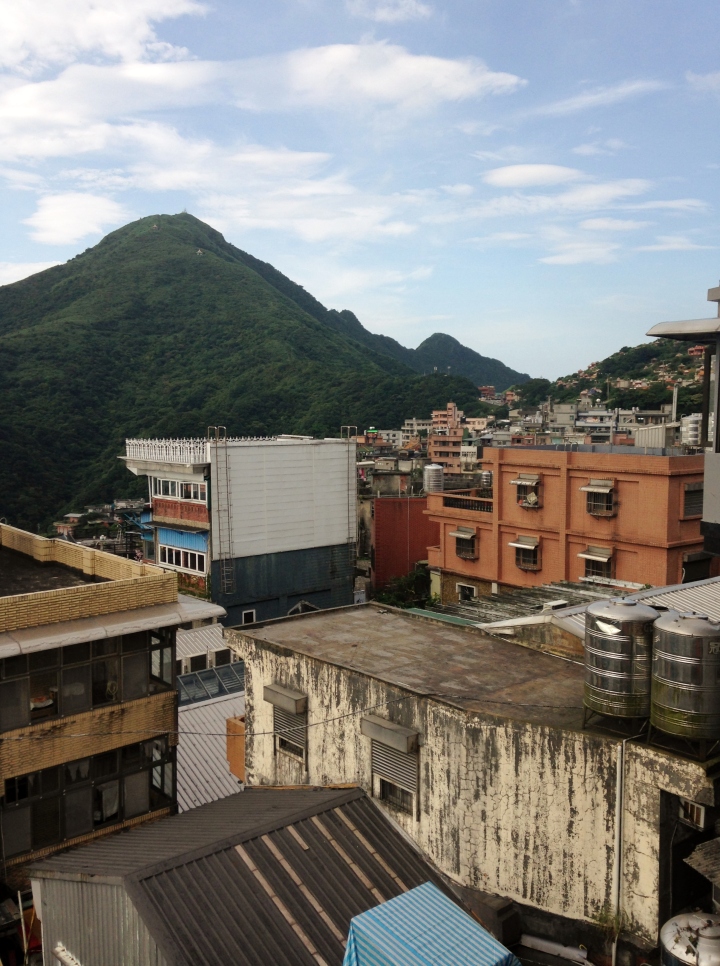 I love the old, almost run down, feel of Jiu Fen. It’s gorgeous. 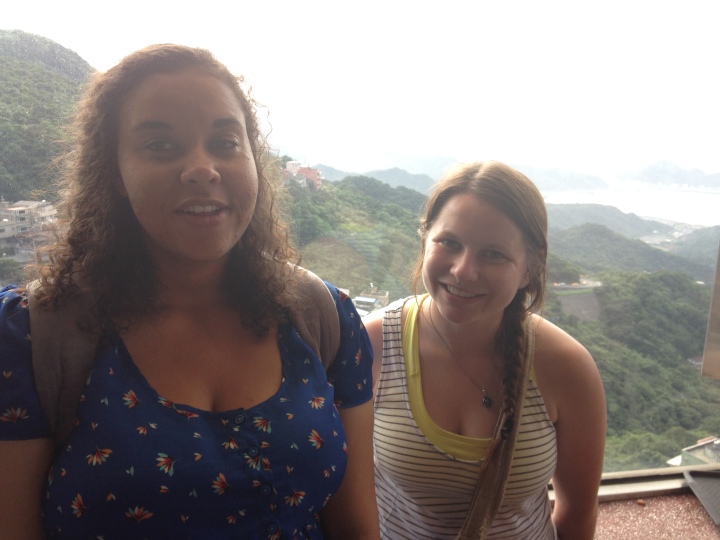 Me and one of my flat mates took a photo by the window. [I was very excited for this adventure–dolling myself up in my most photo flattering dress, and even -gasps!- applying little bit of mascara. I’ve been make-up free for a while, but decided to break my rule for this special occasion ;). I highly doubt anyone could tell though, pfff]

Afterwards, we all headed out to a famous tea house: [ 阿妹茶樓 ] Ah Mei Cha Lou or Ah Mei Tea House, which also inspired the Miyazaki film. 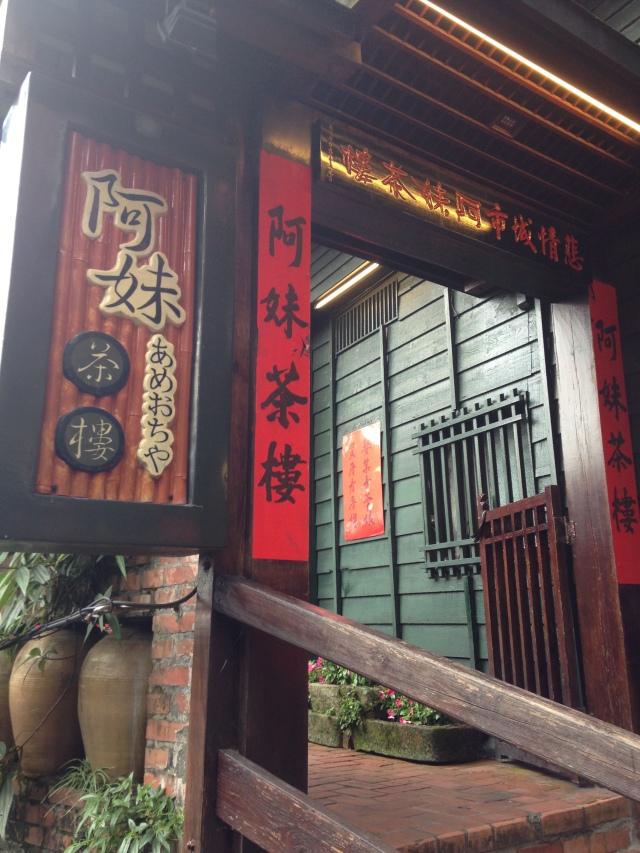 Lit up at night, with all the lanterns aglow, the outside of the tea house looks very similar to the boats that brought the spirits to the bath house in the movie. 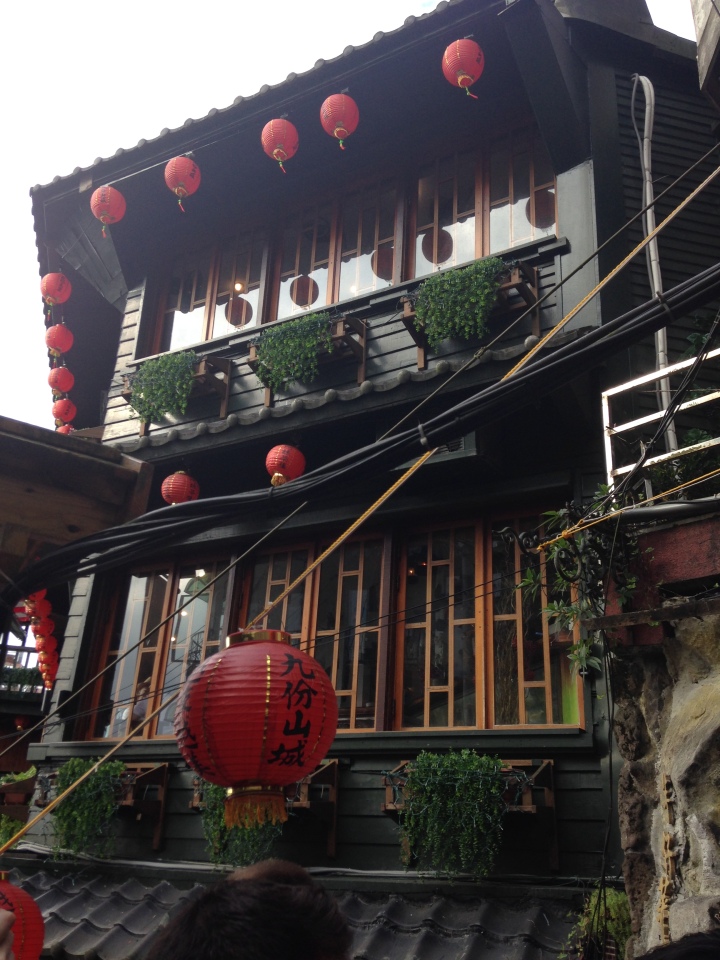 After watching a traditional tea ceremony–explained rather quickly in Mandarin, (the bulk of which I could not understand), we were served these adorable tea snacks, and endless waterfalls of oolong tea. 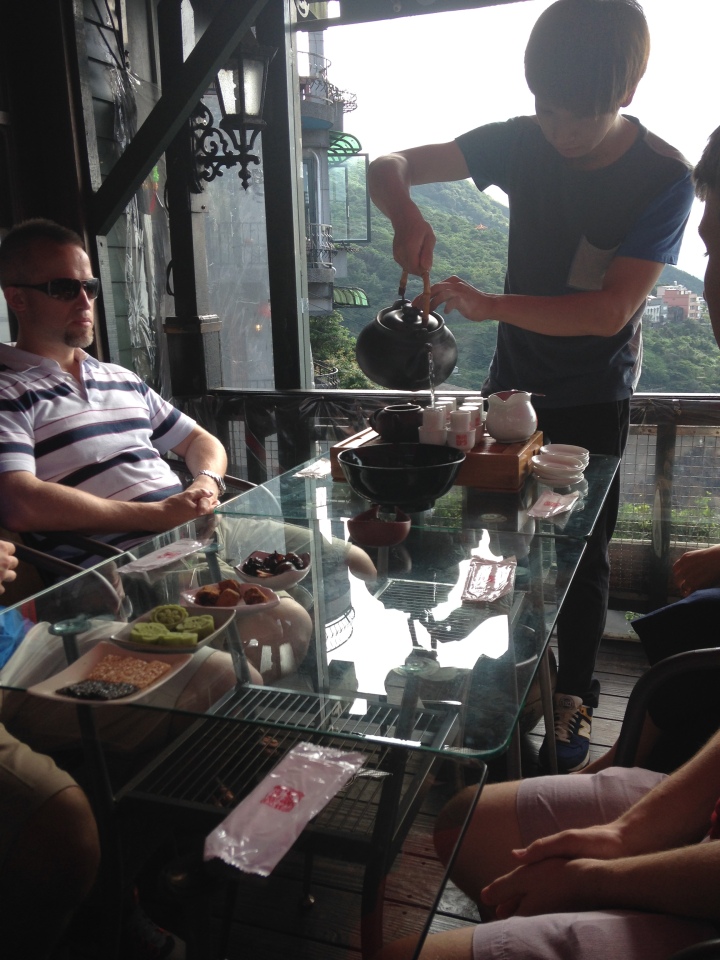 The tea came out of the center cup as though it had been pressurized or sucked in.

It was pretty awesome. 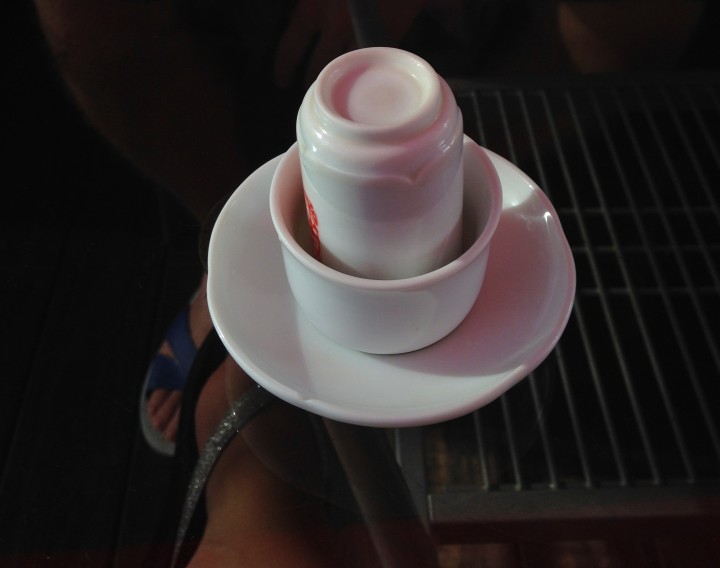 As I guzzled tea like a bottomless well, I also nibbled at these tasty treats!

Unfortunately, I was unable to learn the names of these treats in Chinese–spoken two quickly for my intermediate ears; however, I still have many years and much fluency to develop in this language. I doubt I will never encounter these again. 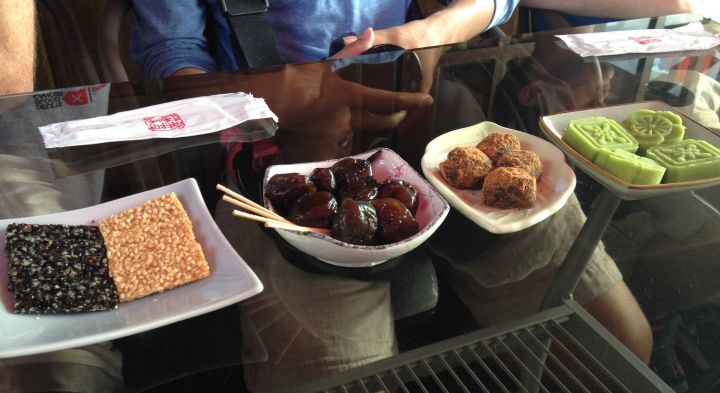 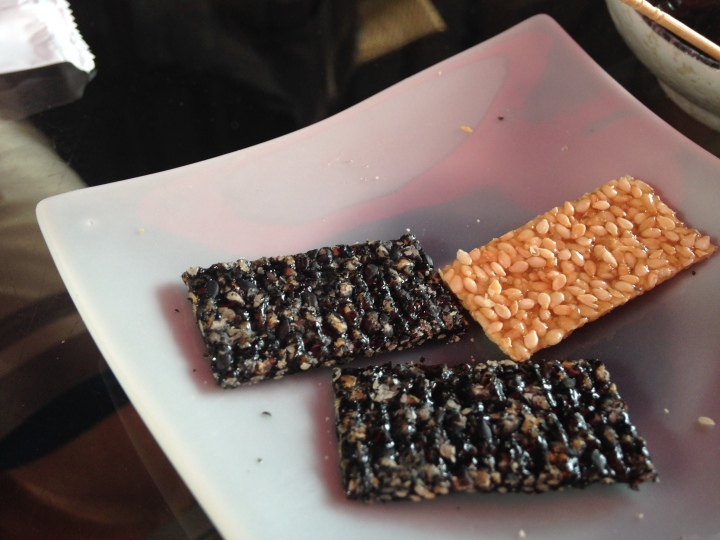 Below is a picked plum flavored with oolong tea. It was also slightly sweet, but had a tart taste as well. 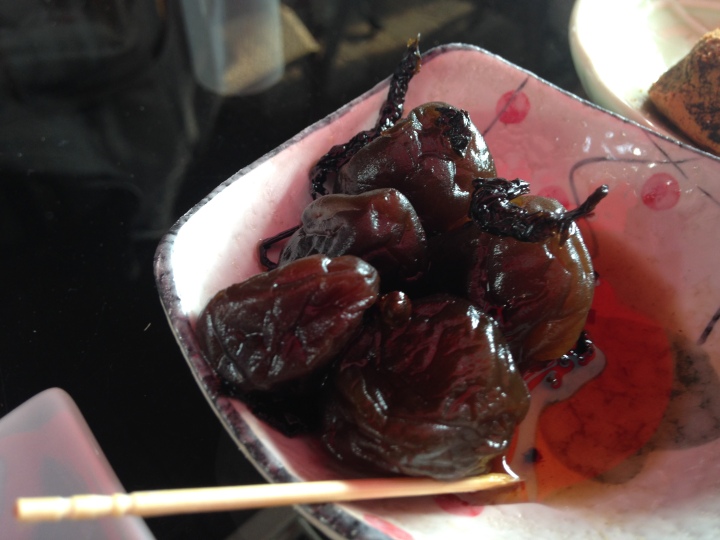 Brown sugar mochi balls. Initially, I wasn’t too much of a fan, but after chewing these for a while–the full flavor formed in my mouth, magnificently. 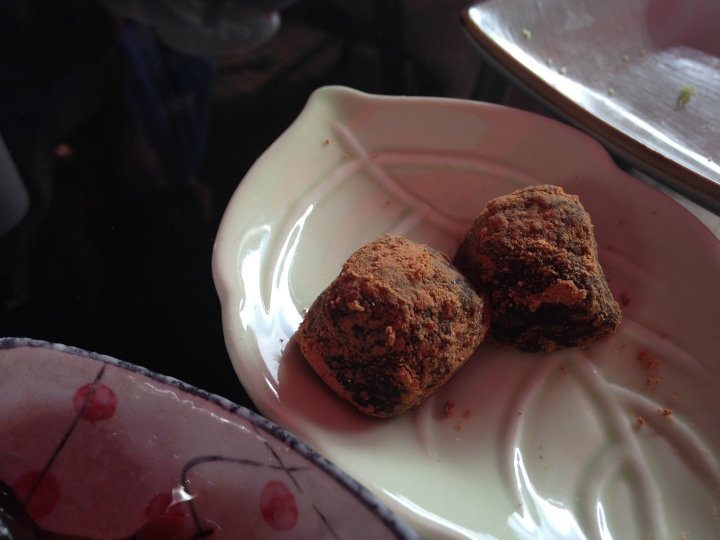 This treat though was by far my favorite. At first, I thought they were some sort of green tea flavored cookie.

I was completely off–instead they were small green bean cakes. 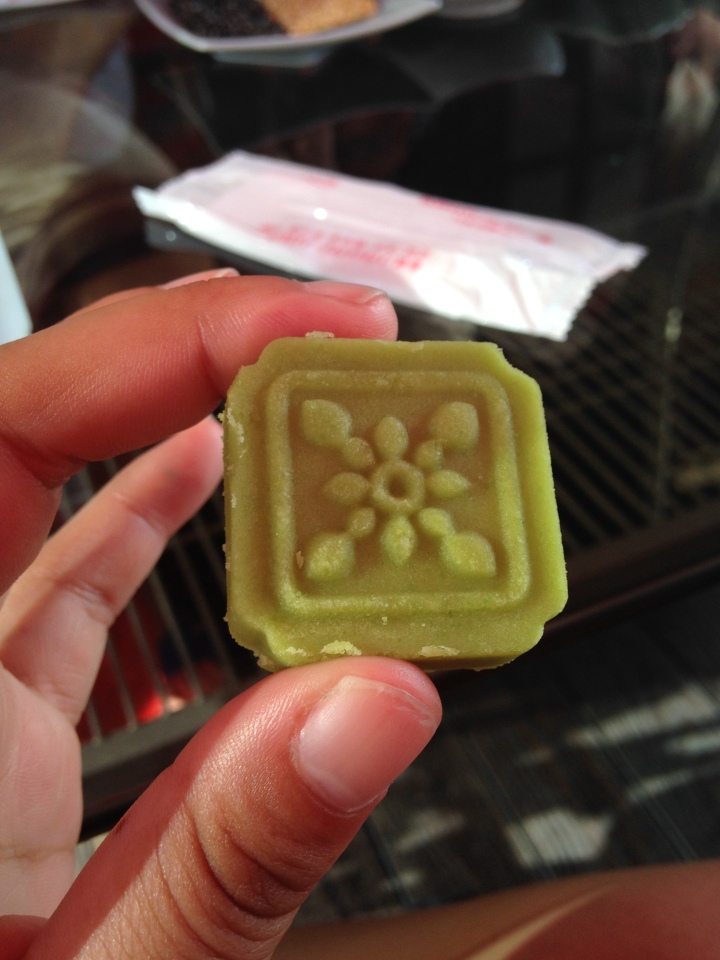 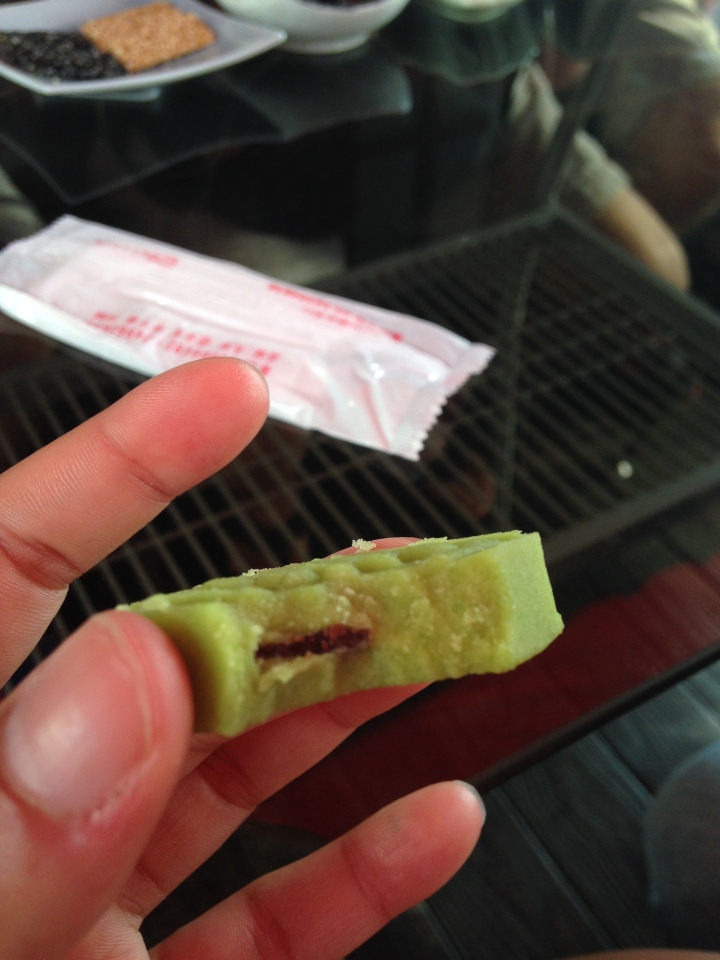 I believe the inside had some sort of red bean paste in it. I loved these so much I nibbled mine slowly as so to make it last, and almost bought myself a box to take home. Almost.

We’d been told as well, by the owner, that many couples come to this particular tea house–the atmosphere is lovey–for dates and proposals. I can see why. Just about everyone–and there were at least 40 of us–seemed to have become “spirited away,” so to speak, by the view and the great food. 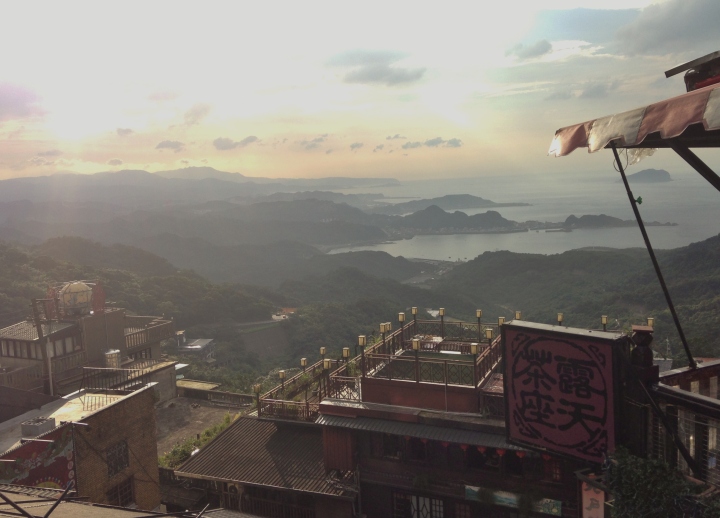 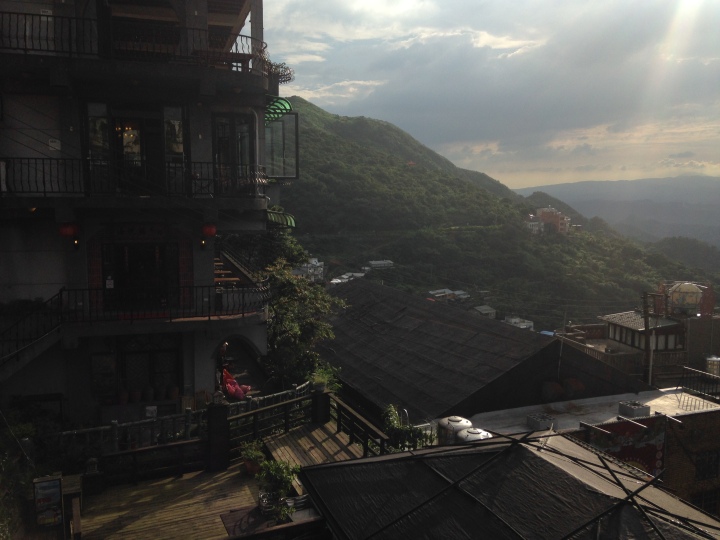 Here’s me outside the tea house in splendor, looking enchanted, or like I’m about to be abducted by aliens…. 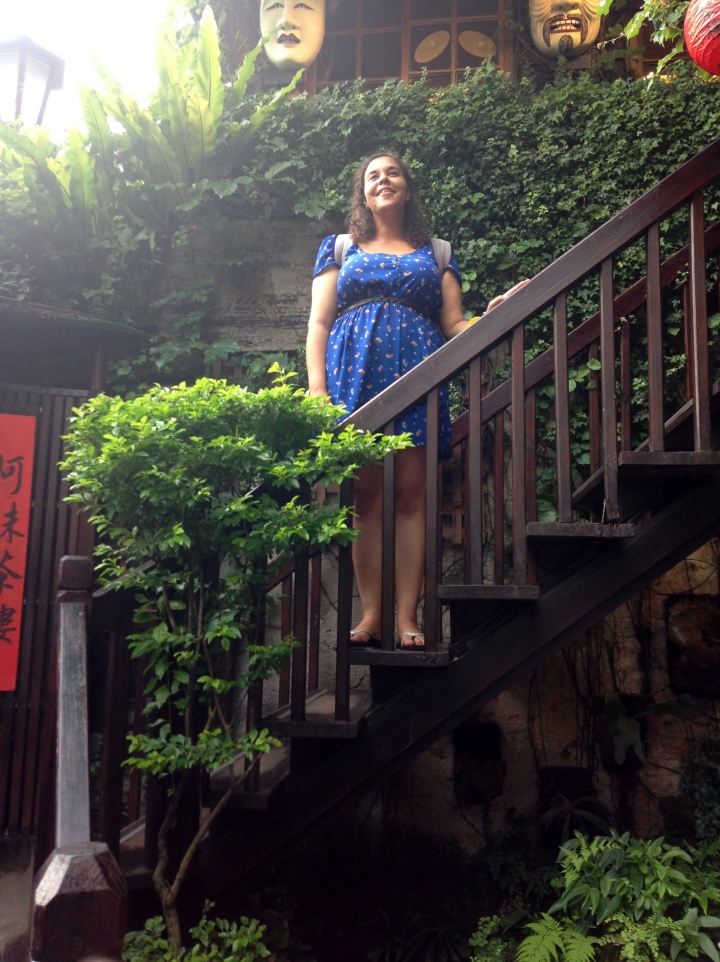 And at such heights–the heat was comfortable. It had to be for drinking all that hot tea.

In addition, Jiu Fen has some tunnels–like the one pictured below. You can walk through them to get to other parts of the city. 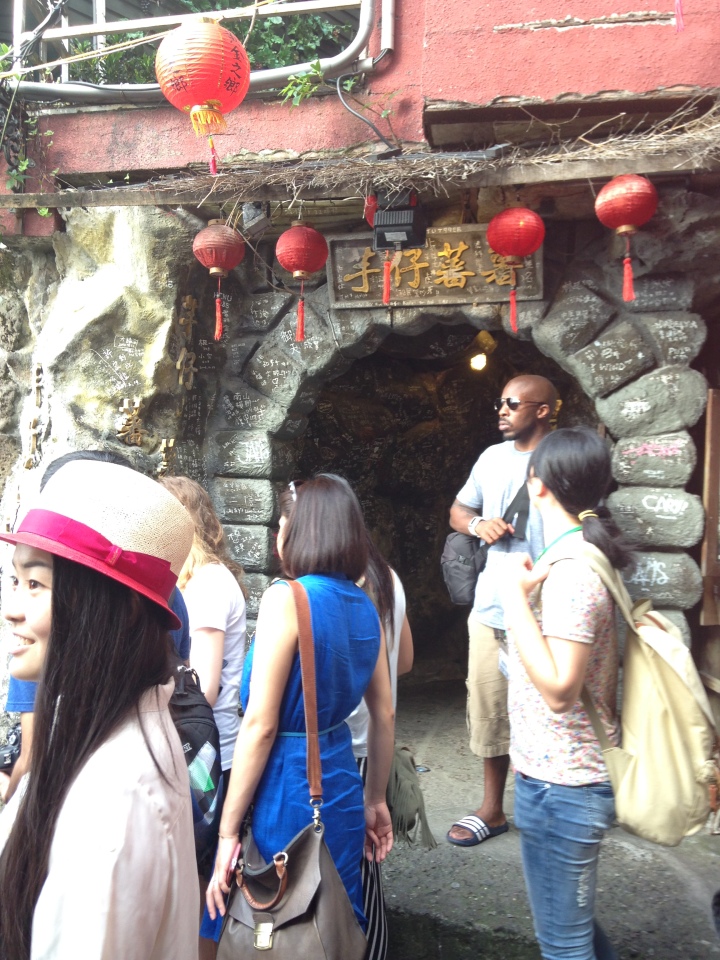 I just hopped into one to snap a silly photo. It was a little too horror movie for my taste. 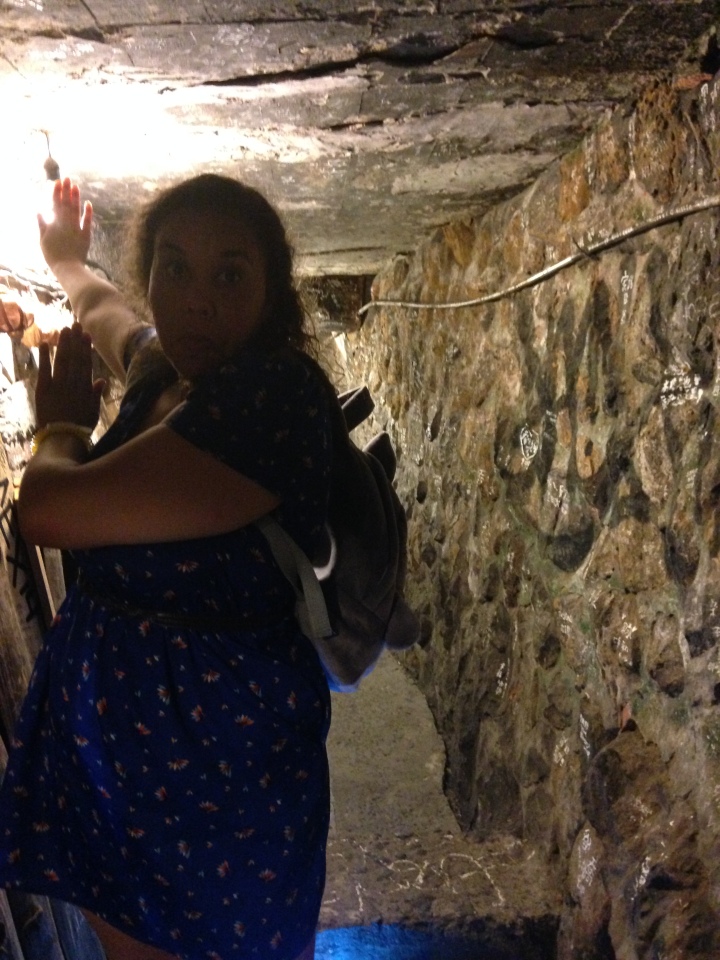 I wanted to stay here forever.

And by here, I don’t mean the tunnel.

Maybe someday, I’ll come back. But for now: to all a good night. 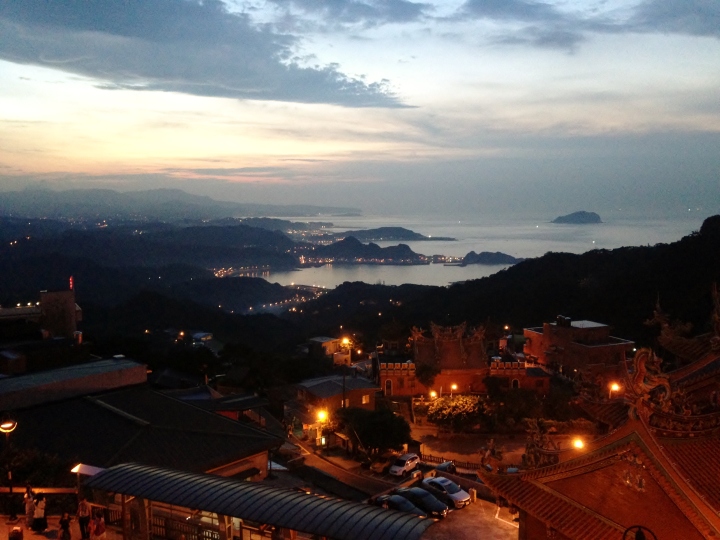 3 thoughts on “spirited away : a magical stroll through jiu fen”

Skye is a student studying in the Chinese Flagship Program at SFSU. Her majors are English Education and Chinese. She loves writing, teaching, linguistics, studying Chinese, eating (If it wasn't obvious), playing videogames, Buffy the Vampire Slayer, anime, reading, spending time with her friends and family, drinking coffee, kale, eggplants, and helping others! She doesn't like mushrooms. They are slimy and gross. View all posts by SailorSkye